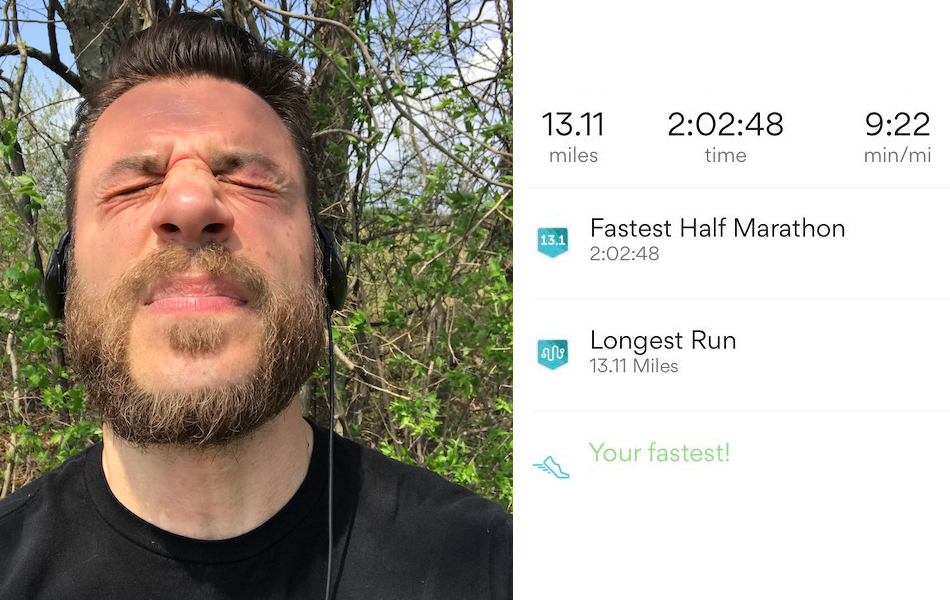 Rarely will I stop running and end on a weird number.

I run until the number rounds up or at least ends with a .5 hanging on the end.

Call it superstition, OCD, being a control freak or just a typical oddball, but it’s just always been my way.

On that afternoon, my longest run ever was 10 miles.

My body and legs felt strong at mile 8, and the mind needed little convincing to break the ten-mile threshold.

The soothing female voice in my ear announced the completion of mile 10, and I estimated being less than a mile from home.

The possible numbers trigger my dislike for unattractive total distances while running towards an imaginary and unexact finish line.

So I kept running until hitting mile eleven, the voice prompt being drowned out by the voice inside my skull, the place where all my best and worst ideas wade around in a season of reasons for or against.

RELATED: My Path To Being A ‘Serious’ Runner

I’ve long thought of the mind like the sea, brimming with ideas, fears, hopes, and desires, hanging in the trough, cresting until finally achieving their moment to crash onto the shore.

A person can take those thoughts, collect those necessary at the moment, and allow the rest to recede back into the deep blue abyss.

The internal voice is shouting loud above the sound of crashing waves.

“You know, a half marathon is just a couple more miles, right?”

“Yes, I know,” I yell above the music in my headphones.

“You’ve never run a half marathon before.”

A retiree and her wet rat of a canine both glare in my direction.

She probably wonders if I’m in the middle of Bluetooth conversation or just batshit crazy and talking to myself.

Her dog stares sideways while taking a dump.

Twelve miles complete and I’ve either accidentally or purposefully run myself closer to my house.

The subconscious sees through my game.

“If you stop at 12 miles, you’re going to be pissed at yourself.”

I can’t recall ever thinking about completing a half marathon.

If asked about running 13. 1 miles for the first time in my life I didn’t imagine my answer would involve “oh I’ll probably just run in circles around my neighborhood, stay close to home in case I’m overcome with the urge to drop dead, wasting energy verbally sparring with the voice inside my head. All for the amusement of a defecating Maltese but definitely listening to Foo Fighters radio.”

Running brings me to unfamiliar places.

Not new towns or new countries but cracks and crevices, nooks and crannies, cul-de-sacs and dead ends I never have reason to explore.

The streets unfamiliar, the people complete strangers, the homes fill the horizon only for a few minutes, evaporating as I run past.

My pace is good, slightly off my typical, but the body felt good but somewhat hot. I’m really fucking thirsty.

The last mile and a half took me to strange places both in my zip code and in my cerebrum.

The thoughts are crashing onto the shore, filled with doubts and second-guessing.

Is this really how and where I want my first half-marathon to happen?

At 3pm on a random Thursday with no one around to celebrate, fist pump and share minors moments with except the mutt now wondering why he’s seen me four times on one walk.

No spectators. No finish line. No free shirt and water bottle, shiny medal, and complimentary bagel and banana.

If you run 13.1 miles for the first time, and no one is around to witness, did it even really happen?

The audio assistant snaps me back into the present.

One-tenth of a mile to go.

And just like that, in the middle of “Monkeywrench” – a song I also heard around mile 4 – my accidental and unplanned half-marathon ends.

I finish at least a mile from my house. The walk home feels longer than the previous thirteen miles.

The passing cars feel close though factually yards away.

Every article of clothing drenched and clinging to the skin.

My body is drained. Like the day after the flu when you’re no longer sick, but you’re not even close to being 100% recovered.

“Good job,” whispers the voice inside my head.

0 comments on “The Day I Accidentally Ran A Half-Marathon”