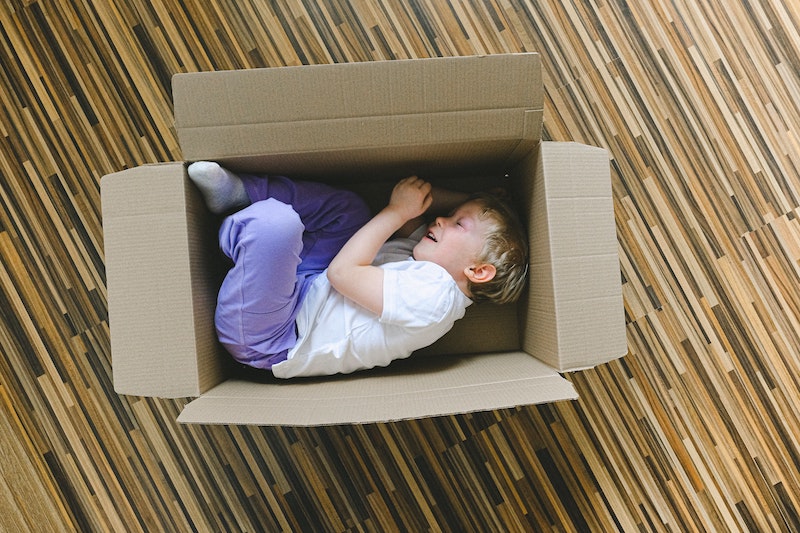 One of the biggest challenges during my stint as a stay-at-home dad was finding fun games for bored kids to play when they grew tired of their toys, YouTube Kids or chasing the cat until he – or the kids – vomited.

Finding fun games that don’t cost a ton is even more difficult.

Here’s a list of fun games for bored kids to play the next time you’re stuck inside the house, in line at the grocery store, packed inside a car, or just trying to kill time until bed.

Fun Games For Kids In The Grocery Store

Send the kids on missions to find grocery items. If you have two or more kids, send each to get a different item to see who can return to the cart the fastest and with the correct item.

This grocery store game takes a couple of minutes of preparation but can be a hell of a lot of fun. Draw up a Bingo board that includes a few of the items on your shopping list. As you put each item into the cart, the kids(s) mark off their bingo boards. See how long it takes to get bingo.

The next activity on this list of fun games for kids calls for a little memory. This likely isn’t the first time the kids have accompanied you on a shopping trip. See if they can remember which items on the list are in which aisle of the store.

Once you find the item, see if the kids can recall the exact product you usually purchase.

Here’s a fun variation of an old classic.

Instead of the typical “I Spy” game using colors, make sounds and use letters. “I spy something that begins with B.”

Create a story using the items kids see in the aisles.

“There once was man who ate nothing but lima beans. He constantly smelled liked cat food and never wore the same light bulb twice.”

Fun Games For Kids In The Car

Create a license plate book with examples of plates from each state.

Try to find the plates that are in the book and write down the type of car, the date and where you spotted the car.

Try and finish the book in one year.

Another fun game for bored kids is Next Turn.

Tell the kids where you’re going and see if they can tell you how to get there.

I’m Going on a Picnic

A fun game idea from MiniTime is the “I’m going on a picnic” game.

“This alphabet-based memory game is great for kids 5 and up. You don’t need a game board or any materials.

The game can be played with as few as two players, but it’s more fun when the whole family joins in.

The first player says I’m going on a picnic and I’m bringing… followed by something that begins with A, such as apples.

The second player repeats what the first person said, but adds something that begins with B. So she might say I’m going on a picnic and I’m bringing apples and bananas.

And so on with C, D, and the rest of the alphabet.”

My kids love these washable window markers from Crayola.

We typically use them in the house but taking them into the car for some Window Hang-Man will happen on our next long car ride.

Fun games for kids shouldn’t be taxing on the brain.

Save yourself the time, effort and headache by printing out a list of “Would You Rather?” questions prior to the trip.

Fun Games For Bored Kids Stuck In The House

Some fun games just need a piece of paper and random objects around the house.

This version of Tic Tac Toe involves found objects around the house to change up the X’s and O’s.

The possibilities, like the junk around the house, are limitless.

Collect all the plastic Easter eggs from your basement or garage and write fun workouts inside like 10 jumping jacks, 4 donkey kicks, 3 spins.

Hide the eggs around the house and then have the kids meet up in a common area to do their exercises together with music.

Blow up a few balloons, grab a few fly swatters, and turn the living room into Wimbledon.

Kids turn couch cushions into forts all the time. Instead of just creating a random house, instruct the kids to add functional features and add “furniture” made from cardboard.

Fun Games For Kids During Sleepovers

Turn sleepovers into an opportunity to teach kids about upcycling by turning empty toilet paper rolls into canvases.

Remain calm. This fun game for kids doesn’t involve any lip-locking. It just involves random nail colors. It’s a version of spin the bottle but each toe gets a different color.

The first player spins the homemade spinner and lands on a random bottle of nail polish. She paints one toe of her choice with that color. The next player goes until every toe is painted.

The kids will wake up the next morning and turn your house into a restaurant anyway so why not make it fun with a healthy breakfast waffle bar. It will cut down on the number of “orders” you’ll have to take from picky kids.

A friend organized this awesome DIY party activity at her daughter’s 9th birthday and it was a huge hit.

All you need are small Ziploc sandwich bags, colorful duct tape, stickers and some creative kids. If you’ve got a ton of time to kill, consider going with the gallon-sized bags.

Fun Outside Games For Kids

Then going to parks and leaving them for others to find.

Help the kids draw amazing scenes on the sidewalk or driveway and then take pictures to make the scenes come alive.

Some fun games for kids are just variations of old games. In this version of tag, players tag one another’s shadow with feet instead of tagging the body.

I worked at a summer camp for years where the kids all played Spud. I never understood the rules until I read this piece on Wired.

“Every player gets a number and crowds around the person who is “it” for that round. “It” then tosses the ball straight up and the other players run away.

As the ball reaches the top of its toss, “it” calls out the number of one of the other players and then runs away also. The player whose number was called must run back and catch the ball (or chase after it if it is bouncing around).

Once that person has the ball, they yell, “Spud!” Then everyone else must freeze. The person with the ball must try to hit one of the players with the ball. If they do, that new person gets a letter (first S, then P, then U, then D) and is now “it.”

If they miss, the person who threw the ball is “it” for the next round.”

And finally, if you don’t mind spending a couple of bucks, check out all of the fun games for kids under $10 on Amazon.

Shove them in the trunk, glove compartment, or that weird seat pocket.

Do you have some go-to fun games for bored kids that aren’t on the list? Let me know in the comments and I’ll add it!