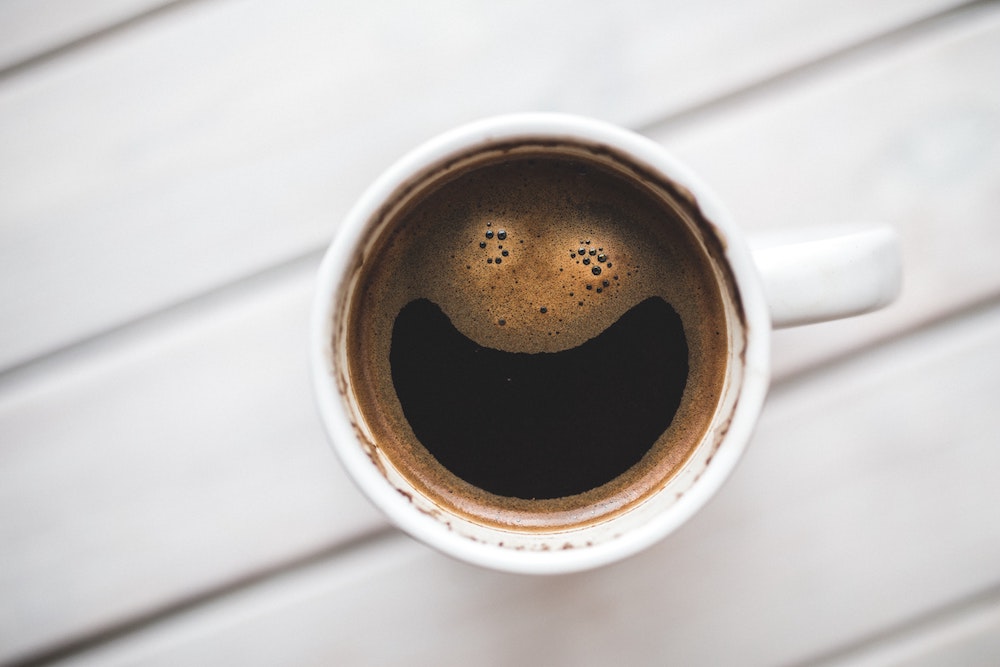 “Even bad coffee is better than no coffee at all.” David Lynch

Coffee has been a huge part of my life for the last twenty years.

Drinking it, hanging in places where its brewed and packaged, and being friends with dads who make their own blends, coffee was everywhere in my life at all times of the day.

Then one day I decided it was time to quit.

So what did I do?

I tried, failed, and then drew a crude but humorous story about the ordeal.

Then I drank coffee again for another couple of months AND THEN I decided it was really time for quitting coffee for good.

Here’s how I quit drinking coffee.

(Note This is not an article about quitting caffeine. Well, not really. I significantly decreased my daily intake of caffeine but I didn’t give it up completely because I’m not f*cking insane. I’ll discuss my caffeine sources later in the article but first here’s how I overcame my addiction to coffee.)

How To Quit Drinking Coffee

Step 1: Analyzing My Relationship With Coffee

People have a relationship with food.

Yes, humans need food to survive, but over the years it’s become common for people to build an emotional attachment to certain foods and drinks.

Is your mom’s cooking really that good or does it just remind you of being a kid?

Would an NFL Sunday really be awful without a cold beer?

Are you finishing a package of cookies for any reason other than you’re bummed about something?

It took some time but I finally realized I had an emotional attachment to coffee.

I wasn’t drinking coffee for the caffeine but more for the feeling each sip of coffee brought along.

The smell of brewing coffee reminds me of Saturday mornings as a kid, laying around in the living room and watching cartoons while mom put on a pot to tackle her day.

A hot cup of coffee sitting next to the computer was the only good thing about my first 5or 6 jobs.

A cup of coffee these days means sitting down to work on a book or article or task at the computer needing my prolonged attention.

Coffee and I had been dating for years.

I felt so silly when I realized my blunder.⁣ ⁣ –⁣ ⁣ #coffee #oops

Step 2: Asking Myself ‘Do I Really Even LIKE Coffee?’

This seems like an odd question to ask since I was downing 2-3 cups a day.

Why would a person drink so much of something he doesn’t even like? But the more I thought about the idea of coffee the more it became abundantly clear that I really don’t like coffee.

I like the creamers and the flavors and the sugar and the feeling of a warm cup of coffee in my hand and those first few sips of the day but hand me a cup of black coffee and say drink that straight and no god damn way.

In a way, I actually quit the extras that go into the coffee.

Coffee just happened to be a not-so-innocent bystander in the experiment.

If something is detrimental to a person’s health and well-being, there’s no better time to quit than that very moment.

But in the case of java, it wasn’t really ruining my life, so I was able to pick the time I wanted to stop drinking coffee.

As I said earlier, much of my coffee drinking came in moments of routine.

I’m also an emotional eater (and drinker). I plan on working on the eating part eventually but I’d also go for a coffee in times of stress WHICH MAKES ABSOLUTELY ZERO SENSE.

In times when I needed to calm down, I WOULD REACH FOR A BEVERAGE WITH CAFFEINE.

It looks even stupider in print than it sounded in my head when I came to this realization.

I checked my upcoming schedule of work and family obligations and found a time when a) I wouldn’t need coffee to cope and b) I’d be too busy to notice that I wasn’t drinking coffee.

Since my relationship with coffee is just that, a relationship, I needed a beverage to fill the void.

It needs to be hot and that’s about it.

I decided against tea because it feels into all the same categories as coffee it has caffeine, I wouldn’t drink it plain, and if I’m drinking tea why the hell don’t I just drink coffee?

Decaf was never an option because decaf is for crazy people. (Who wants all of the awful things that come with coffee but NOT the caffeine?!? That’s sheer lunacy!!)

I tried hot apple cider but it had too much sugar. I tried hot cocoa but it felt too childish.

I heat it up for a minute in the microwave and add just a half packet of Splenda (there’s a slight taste but I can’t have everything be perfect) and it has replaced by dependency on a morning coffee.

It doesn’t have caffeine but Ill explain where I get my buzz from a little later in this piece.

Step 5: I Had To Quit Cold Turkey (Even Though It’s A Bad Idea)

Check out most articles about detoxing from caffeine and coffee and experts suggest a gradual decrease in consumption until you’re drinking none at all.

I’ve attempted this before, with the gradual approach, and got down to a couple of sips of coffee a day.

Quitting cold turkey was my only option.

It was an awful option, and an incredibly crappy day, but by the next day I was actually alright with the decision.

Don’t get me wrong, I was CRAVING a cup of coffee, but I didn’t feel as crappy.

Step 6: Never Leave The House Again (Or At Least For A While)

Alright, so that’s a little extreme but for people who are trying to avoid drinking coffee, it’s incredibly hard to actually avoid the beverage.

There are Starbucks and Dunkin Donuts on every corner, every bookstore has a coffee shop, every restaurant makes coffee and my gym even offers free coffee to members.

I’m at the gym every morning at 5:30 and two pots of coffee are brewing in the kitchen area which is right next to the men’s locker room.

To add another degree of difficulty, I’m a full-time freelance writer.

When I’m not home writing, I’m usually in a coffee shop.

Well, I was always in a coffee shop. Now I’m usually in a library but even MY FAVORITE LIBRARY HAS A CAFE! I’m not kidding.

Eventually, I learned to avoid places of temptation and think about other things in my weakest moments.

Not like for exercise I literally run away from the smell of coffee.

These are the benefits of quitting coffee in my particular case. These might not be the same for everyone.

Weight Loss: This benefit of quitting coffee might not apply to the coffee drinkers who take their java straight (with no sugar and no cream) but quitting coffee could help with shedding a few pounds.

Many coffee drinkers use sugar and cream (or some type of milk) in their daily coffee and those calories begin to add up if a person is drinking more than one cup of coffee a day.

The typical mixers in my daily cup of coffee were half-and-half and a spoonful of sugar.

Skim milk doesn’t cut the bitterness of coffee enough and I hate the taste of artificial sweeteners so those weren’t options. One tablespoon of half and half is about 19 calories and I’d usually put in about three tablespoons (57 calories) plus about 16 calories for a teaspoon of sugar.

I’m not good at measuring or eyeballing so I’m going to round those numbers up to 60 and 20 and say my average cup of coffee contained about 80 calories.

Those numbers aren’t too bad for one drink but one cup of coffee was rare on any given day. I averaged about three cups a day.

Since quitting coffee I’ve dropped about four pounds without really changing much else about my diet and exercise routine.

Sleeping better: Don’t act surprised when I say that cutting out so many cups of coffee helped with my sleeping issues.

Yeah, duh, less caffeine is going help with sleep but cutting out all the coffee has made me a better sleep.

I don’t wake up as often, fall asleep easier and even the mornings are a little less harsh.

Oral Health: Everyone knows that coffee will stain teeth and drinking less coffee means less money on tooth whitening kits and toothpaste but coffee also dried the hell out of my mouth.

I could never escape the constant feeling of coffee breath.

The more I brushed and flossed, the drier my mouth seemed to get, and I couldn’t shake the taste or smell.

My mouth just feels cleaner now without constantly having to scrub away coffee stains.

Caffeine Intake: I was probably having way too much caffeine in a day.

Here’s how you can tell you’re having too much caffeine.

So What Do I Do To Replace The Caffeine?

As I said in the opener, I didn’t give up caffeine because that would be insane. I did decrease my caffeine intake by eliminating coffee from my life.

I still have one good shot of caffeine during the day but also do a couple of other things to recharge the internal batteries and give the body a jolt.

5-Hour Energy: I realize energy drinks and shots aren’t the best for the body but I only drink a half a bottle in the AM and it usually gets me through the day.

Green Tea Extract Pills: I take two in the morning (but not if I’ve had any energy shots or drinks) and they last the entire day. An added bonus is green tea helps burn fat and increase metabolism.

5 Minutes Of Vigorous Exercise: The healthiest of all the pick me up options, I’ve found that getting up from my desk and just moving around for five minutes will snap me out of a funk. Any exercise will work. Even a quick walk around the block.

A short nap: If you’ve got the time and enough room under your desk, go for the quick power nap. It will do wonders. Heres how long to nap without feeling worse.

The Most Important Tip To Remember

As with any life change, quitting coffee is a process and it requires patience.

It’s also an everyday struggle. There have been countless mornings when I just wanted to dunk my face into a pot of bold roast and go back to the way things used to be.

“I miss you, coffee! Lets never break up again! I want you to meet my parents!”

But I just remember that the positives FAR outnumber the negatives. I’m better without than with.

I’d love to hear any success stories about quitting coffee. Hell, I’d love to hear the failures too. Maybe I can help someone work through quitting coffee for good. Leave me so comments and let me know where you are in the effort to stop drinking so much coffee or email me at messagewithabottle [@] gmail [dot] com.