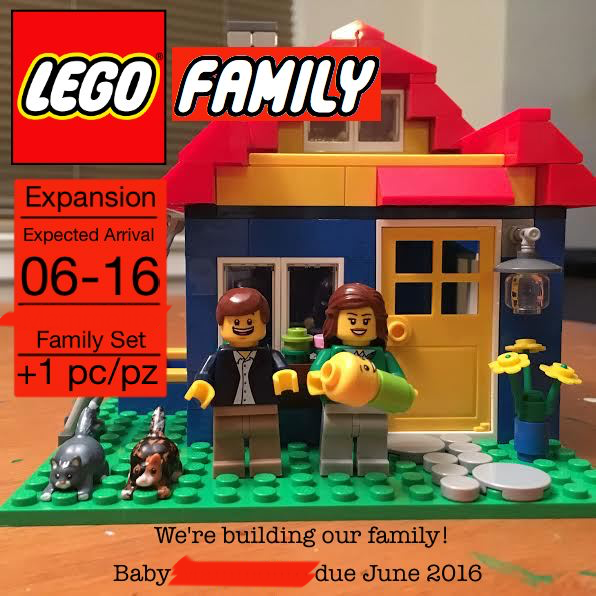 This LEGO baby announcement needs to start a trend of more original and well thought out pregnancy decrees.

This couple decided on the LEGO baby announcement because they’re not into the shots of holding a pregnant belly or glamour shots.

“Just silliness on our part,” explained the expectant dad in an email. “That’s all you’re going to get. We try to be pretty down to Earth while also being just a bit creative.”

Dad and mom went to the LEGO store near their home and bought minifigs that resembled the couple — and their cats. The LEGO set is actually a pencil holder.

“A lot of people were saying how awesome they are and how original and creative. It was a good feeling because we did put a large amount of work and effort into it and it did take some time to pick everything out. A lot of people on Reddit specifically have asked about the cats, and my wife’s friend did some awesome for painting them.”

RELATED: Titanic Lego Recreation Is Amazing Until You Find Out The Time, Money Involved

Unfortunately, the LEGO baby announcement is for social media only.

“I don’t think we are going to actually send them out,” RockOutToThis explained. “We just added that we are having a baby onto our Christmas cards, so this was more of a social media announcement than anything.

As far as the nursery is in it’s planning stage, my wife is really into mid-century modern looks, but I do plan on having a bunch of LEGO-themed things, or a bunch of sets in there.

So the question had to be asked, with all of the odd baby names going around, if there’s any chance of naming the kid LEGO.

“I would totally do this! I doubt my wife would. Lego would be a cool name for a boy though, but we already have a couple of names for each gender that we are leaning towards.”