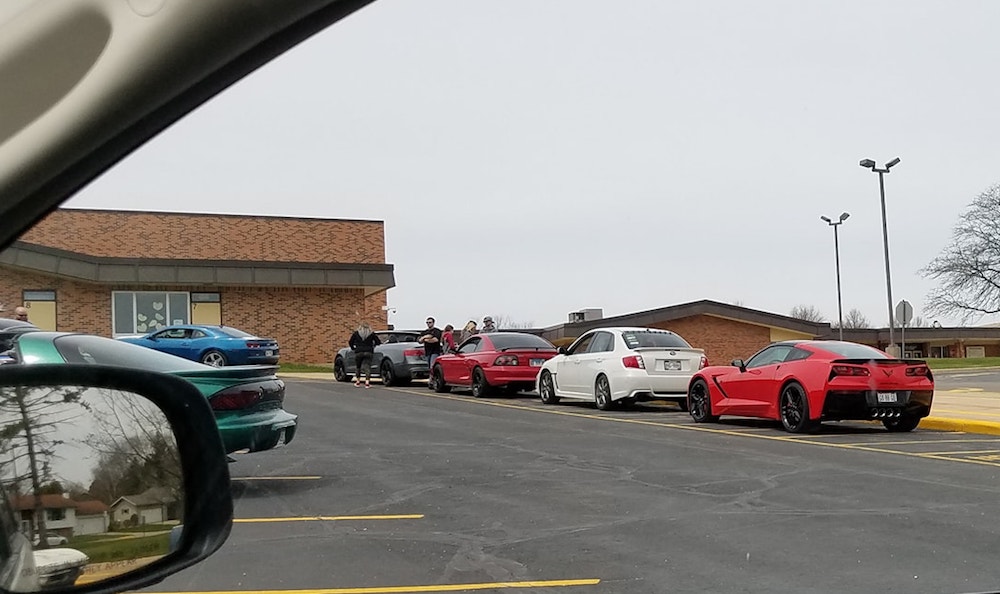 Every parent is looking for things to do with kids to past the time during the quarantine.

Tara Blaesing has been stuck inside the house with her husband and five kids – ranging in ages from 9 years old to 9 months old – and ran out of activities weeks ago.

“My husband has been great at trying to keep the kids from banging on the door of the bedroom all day — but I can’t count the number of times I’ve had to keep a carefully neutral look on my face during a Zoom call while one or more screaming children were trying to break down the door to get to Mama!”

Yup. We can all relate.

A friend shared a Facebook invite for the “Show Some Love. In Town Car Cruise.”

Cars would be lining up at her kids’ school to drive through town.

Unfortunately, Tara didn’t read farther before deciding that she and the kids were going to take part.

As soon she pulled up to the school, the mom realized she misunderstood the invitation.

“It’s then that I notice that EVERY SINGLE CAR THERE is either some sort of hot rod muscle car, vintage, or really super fancy. In other words, I have just signed myself up to participate in a car rally in my basic soccer mom Chrysler Town and Country.”

“I soon realized ‘car cruise’ is a well-known term used in car club circles, and that my friend had marked herself as ‘interested’ to watch the cars, not to be a participant!

So I panicked, and I quickly pulled into a parking spot to figure out my next move. But looking in my rearview mirror, my kids were so excited about being in a parade, so I knew I had no choice but to just go for it.

So I snapped a few pics to send to my mom friends, and when the cars began to pull out of the lot (to start the parade), I just put an embarrassed smile on my face and followed.”

Tara posted her photos to Facebook and parents around the world shared in with their embarrassing stories in the name of entertainment.

And the cherry on top of the sundae: “Did I mention that the kids were dressed up in Halloween costumes?” Tara wrote in the Facebook post.