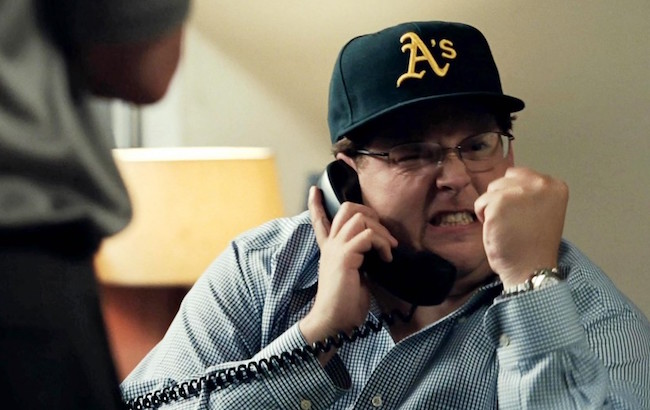 Hell, I love all quotes.

Moneyball: The Art of Winning an Unfair Game is a book by Michael Lewis about the Oakland Athletics and general manager Billy Beane.

The moral of the story is “making the best of what you’ve got when you don’t have much.”

Make the best, and most, with what you’ve got.

Here are some Moneyball movie quotes, and quotes from the Michael Lewis book, to keep in mind.

“It’s hard not to be romantic about baseball. This kind of thing, it’s fun for the fans. It sells tickets and hot dogs. Doesn’t mean anything.” — Billy Beane

“I know these guys. I know the way they think, and they will erase us. And everything we’ve done here, none of it’ll matter. Any other team wins the World Series, good for them. They’re drinking champagne, they get a ring. But if we win, on our budget, with this team… we’ll have changed the game. And that’s what I want. I want it to mean something.” — Billy Beane

“Would you rather get one shot in the head or five in the chest and bleed to death?” — Billy Beane

“You get on base, we win. You don’t, we lose. And I hate losing, Chavy. I hate it. I hate losing more than I even wanna win.” — Billy Beane

“When your enemy’s making mistakes, don’t interrupt him.”– Billy Beane

“The problem we’re trying to solve is that there are rich teams and there are poor teams. Then there’s fifty feet of crap, and then there’s us. It’s an unfair game. And now we’ve been gutted. We’re like organ donors for the rich. Boston’s taken our kidneys, Yankees have taken our heart. And you guys just sit around talking the same old “good body” nonsense like we’re selling jeans. Like we’re looking for Fabio. We’ve got to think differently. We are the last dog at the bowl. You see what happens to the runt of the litter? He dies.” — Billy Beane

“Every form of strength is also a form of weakness. Pretty girls tend to become insufferable because, being pretty, their faults are too much tolerated. Possessions entrap men, and wealth paralyzes them. I learned to write because I am one of those people who somehow cannot manage the common communications of smiles and gestures, but must use words to get across things that other people would never need to say.”

“The sheer quantity of brainpower that hurled itself voluntarily and quixotically into the search for new baseball knowledge was either exhilarating or depressing, depending on how you felt about baseball. The same intellectual resources might have cured a common cold, or put a man on Pluto.”

“No matter how successful you are, change is always good. There can never be a status quo. When you have no money you can’t afford long-term solutions, only short-term ones. You have to always be upgrading. Otherwise, you’re f*cked.”

“Baseball has so much history and tradition. You can respect it, or you can exploit it for profit, but it’s still being made all over the place, all the time.”

“If you challenge conventional wisdom, you will find ways to do things much better than they are currently done.” –Bill James

“It is the nature of being the general manager of a baseball team that you have to remain on familiar terms with people you are continually trying to screw.”

“If you challenge the conventional wisdom, you will find ways to do things much better than they are currently done.”