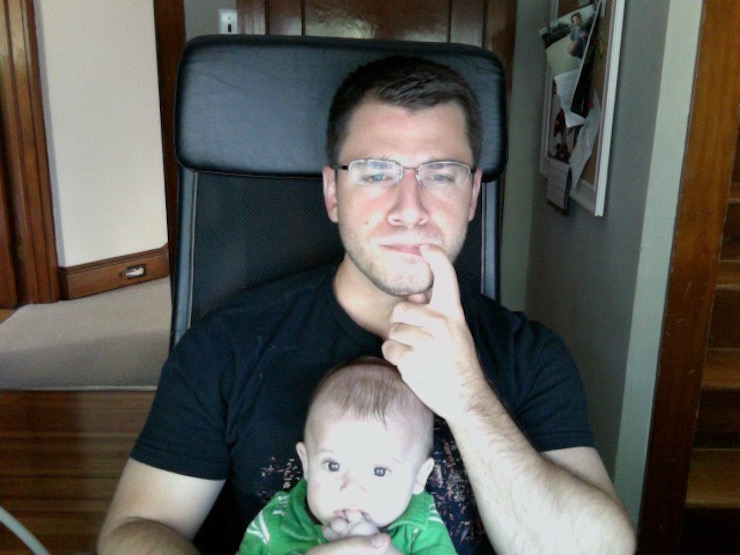 Recently, a Reddit user posted this question to the r/Daddit section:

My husband and I are parents of a very cute 18 mo little girl.

Since her birth, my husband has found himself very unhappy with his life. He’s often sad, removed, and angry.

He’s taken some time apart, spoken to friends/family and myself.

But the truth is, he hates this new life… waking up early, being responsible 24/7, not being able to go out unless we have a sitter etc. He resents it and misses his old life.

Or as he calls it, his “perfect” life.

When it was just the two of us. He stills loves me and talks about just wanting me.

He does love his daughter but has a very hard time with everything else that comes with it. I’m very much in love with him but I find it very hard. We are talking about separating as it has been 18 months and I don’t know how he can change.

Any stories/ insights/ advice would help. Thank you.

I recognized those symptoms immediately because I was once like that dad.

I wrote about my experience with postpartum depression in men for a website that no longer exists but was able to find a republished version on The Good Man Project.

Here’s the article in its entirety.

Hopefully, it helps someone else struggling with the issue.

Postpartum Depression In Men: Who Says It’s Just for Women?

The room is near dark except for a sliver of light coming through the curtains from a much-too-bright porch light across the street.

Except for a few quick naps, I’ve been awake for almost 24 hours. I look down to notice the bottle is almost empty.

Now it’s a competition to see who nods off first.

It seemed like a simple fix: since daycare is obscenely expensive, it would just be better if I stayed home with the baby and freelanced full-time.

I had it all planned in my mind down to when he would nap and when I could get some free time to write, work out, or just relax and read.

One minor issue: 4-month-olds don’t give a shit about schedules.

I slowly, and as quietly as the hundred-year-old floorboards will let me, walk him over and lay him down for the 11th attempt at putting him to bed.

The second his head hits the cool, elephant-illustrated sheets, he is awake and screaming like a car alarm.

I’m ready to cry from sadness, frustration, anger, selfishness, and the realization that this evening is going to keep replaying over and over for the next few months. If I survive.

Is it possible for men to suffer postpartum depression?

At the OB/GYN for the third visit since the baby was born, my wife filled out yet another form about postpartum depression, checking no in response to every question.

She is just as tired, cranky, and scared as I am, but is much better at handling this type of life upheaval. I glance at the questionnaire and imagine marking down yes after yes with a #2 pencil.

Slightly more than 10 percent of new dads become depressed before or after their baby’s birth, according to recent findings by the American Medical Association.

Of the fathers studied during the period between the first trimester and first year of the baby’s life, 10.4 percent of dads were depressed, compared to 4.8 percent of men who are depressed but without children.

Oh, and according to MSNBC, Rates are even higher in dads who work from home or stay at home. Ding ding ding!

Postpartum Depression in men is real.

Men tend to experience depression more in terms of agitation and irritation than tearfulness and sadness, explains Dr. Sara Rosenquist, author of After the Stork: The Couples Guide to Preventing and Overcoming Postpartum Depression.

What if I just left him and went to bed? Threw my hands up, packed a bag, checked into a hotel and came back for his second birthday when most of the hard stuff was over?

What if I left him at the door of a police station or in an ER? How mad could his mother get? What if, in a moment of panic or exhausted idiocy, I did something to hurt the baby?

One morning over coffee, I admitted to my wife that I could see how people go off the deep end and do something drastic.

It’s a scary realization to come to.

As much as I love my kid, life has been hell for the past four months. It’s one reason I started a blog writing Post-its about new fatherhood.

Obviously, men don’t give birth, but as modern fathers take an increasingly larger role in parenting, sleep deprivation, lack of exercise, unfamiliar schedule, and loneliness are surely weighing on us more and more.

I can’t be the only one reading the pamphlets about women and postpartum depression and noticing I have most of the symptoms. And hopefully, those other guys will read this article and realize they’re not alone.

A few months have passed, and so have a lot of the negative feelings.

Sure, I still get sad, depressed, or overwhelmed with a brief feeling of suffocation, but I’m learning to ride it out. The moments with my son where he interacts, reaches for me, and smiles so huge he might get premature laugh lines those makeup for the occasional thoughts of what the hell happened to my life?

In other words, much like the midnight feedings that seem to come out the back as fast as they go in the front, this too soon shall pass.

This article originally appeared on Asylum.com.

0 comments on “Postpartum Depression In Men Is Very Real”