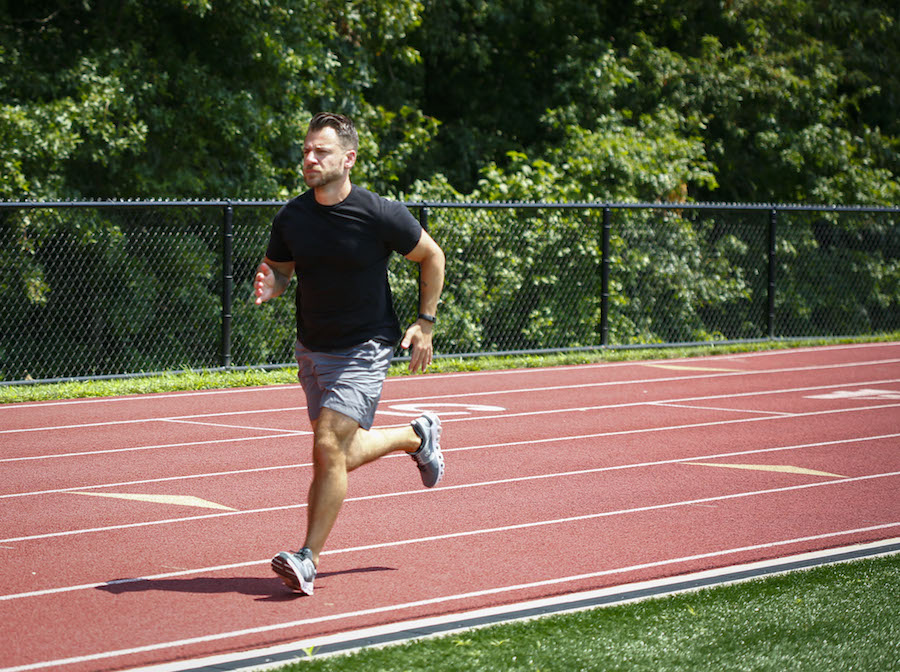 My nipples are on fire.

Running in shirts not made for hours of sweat will cause chaffing.

Mangled toes and bloodied toenails is another unfortunate side effect of running long distances.

My 6-year-old mentions my crimson-stained second toenail as I’m toweling her off after a bath.

“What’s that?” she points, horrified.

I explain it’s from running. An accidental half-marathon the cause.

She pauses, thinks, and announces that my face is the best part about me and the rest of me is gross.

Training for any sport involves uncomfortable side effects on the body and the typical way of life.

There’s no storage of articles pontificating on the benefits of running. It’s only fair to present the few negatives of the sport.

Other runners will likely nod in agreement and recognize their own issues in more than a few of these descriptions.

If any of these things make you uncomfortable, sound laborious, or plain just turn you off, you probably weren’t serious about running from the start.

Running Side Effect #1: The burning nipples thing is avoidable

There are nipple bandages, shirts that won’t irritate, or just running shirtless (not so easy for women) but eventually, it just happens.

Here are some prevention ideas and treatment when it happens.

Even if you own a substantial amount of workout gear, you’re going to eventually have to do laundry.

A ton of laundry.

This is especially bothersome in my case because I don’t own a washer and dryer. My apartment complex offers a laundry room, but it’s $3.25 to wash and dry one load, and the machines only take quarters.

Playing scavenger hunt for quarters or continuously going to the bank to get a $10 roll is a colossal inconvenience.

The other options are going to the laundromat (often a huge time suck) or send clothes out to be laundered (kinda pricey but a time saver).

This is another clothing issue that only happens with particular workout gear.

No matter how long you wash clothes, or how strong the detergent, some running gear just hangs onto the funk of running and sweat.

I think it’s due to sweating profusely in a shirt and shorts and tossing them in a laundry basket while soaking wet to sit for a few days, weeks or even longer.

There is detergent explicitly made for activewear. I’ve never tried these types of detergent, and at $11 a bottle, I’m not really willing to give it a shot.

Mangled and bloody toes are just gross side effects of running so damn much.

Some instances of black and bloody toes are serious, but most issues are treatable.

If you’ve got a closet full of open-toed shoes, or don’t want your feet to look like the Cryptkeeper, find the right running shoe, modified the way you run, or keep your distances down.

Other body issues include blisters, the chaffing mentioned above, occasional aches and pains, and the looming possibility of minor injuries that come with athletics.

Running Side Effect #5: The time thing

Running long distances takes up a ton of time.

If you’re averaging 8-9 minute paces, with stretching after and showering, you’re usually looking at an hour or more of time.

If you love the sport enough, you’ll find the extra hour or more.

Finding the extra hour is easier when you work from home as I do.

If you commute to work, I suggest running during your lunch hour, but only if a shower is available after your run.

No one needs to smell you for the rest of the afternoon.

And now, the positive benefits of running…

It’s never healthy to focus on the negative.

Here are some positive side effects of becoming an avid runner (besides the obvious health benefits.)

You’re better at crossing the street

You’re probably saying, “Crossing the street? What moron doesn’t know how to cross the street?”

The number of pedestrians killed in traffic in the United States is approaching a three-decade high, contributing to what has been an “alarming rise” in such deaths in recent years, according to a new study.

Running makes you more aware of your surroundings, especially when you’re sharing the road with cars that probably aren’t paying much attention.

Unlike riding a bike, I suggest running against traffic. A bicycle is a mode of transportation. Cyclists should obey the rules of the road and abide by the same rules as a car.

Running is like playing Frogger. Especially if you run through crowded cities.

Don’t run out into traffic, but do whatever you can to stay alive.

Why? Because it’s possible to dodge a swerving car that you see coming than avoid a moving vehicle that might hit you from behind.

ALWAYS opt for the sidewalk or the shoulder of the road, but if neither are available run against the flow of cars.

Learning to not give a crap about the weather

I’m not a weather watcher.

I don’t check it on my phone, never watch local news, don’t listen to the radio or read the 10-day forecast online.

I wake up, look outside, and unless the Earth is swallowing itself whole, I’m going to eventually go out for a run.

This wasn’t always the case.

Just the smell of rain once kept me indoors.

Until I eventually came to the realization that even on the most beautiful day of the year, I’m going to finish a run soaking wet.

I run with my phone. I use it to play music, podcasts, to track my time and distance and should an emergency strike while running in the middle of nowhere.

These are the benefits of running with a smartphone. The drawbacks are numerous.

The device can be a significant distraction, specifically if the notifications are turned on for every app, the phone is constantly ringing with calls about work or family, or your constantly pissing around with the song choice or staring at your time.

First, take my advice and turn off the notifications. Not just while running but as a life rule.

Second, ignore your phone. This gets easier over time, especially when your times start to improve and looking at a phone for just a second could keep you from personal goals.

Remember earlier in the article when I mentioned running is a significant time-eater.

But running does take up large chunks of time, but just like a person sees improvement in 5K times and total distances, runners are usually better at time management.

We stop doing pointless things that suck up time like Netflix binges or going to work early or staying late, just to “show our face.”

We combine running with other activities like running around sports fields while kids are practicing or running with friends instead of sitting in coffee shops and loading up on sippable sugar bombs.

Runners find the time and planning one daily event means organizing and scheduling the entire day.

People with schedules are more successful.

The Good, The Bad, and the Whatevers of Running

July #running is done. ⁣ ⁣ Comparing to the previous month:⁣ ⁣ #Ran a total of 9 more miles than in June.⁣ Average pace rose by a measly 6 seconds.⁣ Squeezed in 2 additional runs.⁣ ⁣ My first #goal for the month was to run a 10K under 50 minutes and I missed that by 3 seconds!!!⁣ ⁣ My second goal was to sign up for a race. I still haven’t done that so 🤷‍♂️. ⁣ ⁣ This month, I want to break my personal best in 10K and 5K — and also buy some new running shirts. ⁣ ⁣ If you’ve got a company shirt you want to gift me, I’ll wear it in a photo and give you a free plug. ⁣ ⁣ —⁣ ⁣ #run #fitness #runner #runningman #runnersofinstagram #runners #motivation #training #instarunners #runhappy #cardio #workout #travel #instarunner #runningmotivation

There are hundreds of positives and negatives to running.

I’m not going to list them all. I’ll let you figure those out on your own.

If these weren’t enough to scare you off, I’ll see you out there.

0 comments on “The Unexpected Side Effects Of Running”