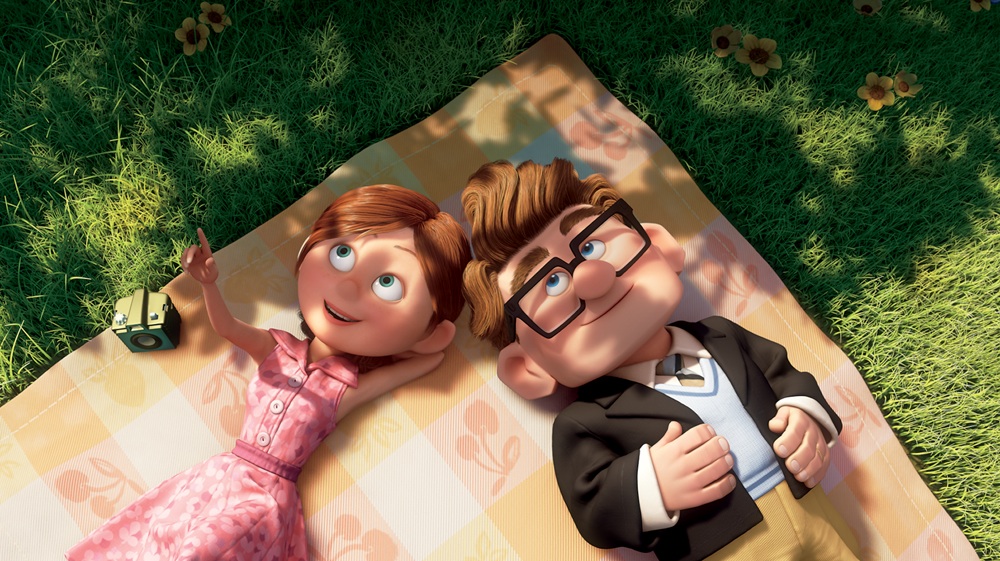 I don’t feel like I’m beating a straw man when I say that many women get the impression that guys aren’t interested in romance in our entertainment.

Some would probably claim we don’t like in general, but I digress.

Men and women both enjoy romance in entertainment, just in different capacities and to different degrees.

While women like stories that are driven by romance – see anything by Nicholas Sparks.

Men prefer entertainment where romance is driven by the story – see romance in Star Wars.

So, today, I’m going to talk about what I consider to be the great unifier.

The single greatest fictitious love story of all time that I think I can get the greatest number of men and women to agree on.

It makes me cry every time I watch it.

Carl and Ellie: The Love Story in ‘Up’

The romance of Carl and Ellie is the foundation of the entire film UP.

The two meet as children, both fans of the adventurer and aviator Charles Muntz.

Ellie, a spunky and upbeat tomboy, is challenging and exciting to the shy and introverted Carl. After their introduction we see their entire life play out in montage.

We see them care for each other and grow older until, one day, we see Ellie unable to make a climb up their picnic hill.

No words are needed, it’s so powerful.

Most love stories only cover the initial phase of any romance. In the early stages of romance, things are exciting and new, spontaneous.

This is the stage you see in every other Disney movie.

Princess meets the Prince, they face a challenge together and are quickly married. Happily ever after.

Except for the fact that they’re 20. I knew jack about love, caring for a wife, raising children, etc at 20. (Not to mention governing a monarchy).

In fact, they don’t even know each other that well.

In your average rom-com or animated feature, the characters have the equivalent of 3 dates before they settle down together for a long life of happiness.

It reminds me of pre-marital couples counseling.

My soon-to-be wife and I had been dating for several years, all through our education, and knew each other very well.

We’d talked about how many kids we might want, where we’d want to live, what we wanted from life.

We were on the same page.

Contrast that with other couples who’d been dating a year before getting married. “Oh, you want a big family? I was thinking maybe 2 kids. Maybe 2.”

UP shows us all of that, a life viewed through fast forward.

The development from a young couple to an established couple (they upgrade furniture, fix up the house).

The setbacks of real-life (breaking into their dream trip savings again and again).

The heartbreak of unforeseen tragedy (inability to have children). And the ultimate separation we know is inevitable but pray will never come (the death of our spouse).

The love story in UP is the real deal. It’s real, it’s raw and it hurts.

Though Ellie passes away in the first few minutes of the film, her marriage continues without her.

Now a shut-in, Carl has become meticulous about preserving their home to the point that it’s now essentially his mausoleum.

He speaks to Ellie as if she were there with him.

When his status quo is upset, Carl risks everything to bring their home to Paradise Falls, the location of their youthful, adventurous ambitions.

Carl’s journey is interrupted by what he considers distractions.

A Wilderness Explorer who needs a dad. A dog who needs compassion. An endangered bird who needs an advocate.

Ultimately it’s Russell who pushes Carl to the pivotal moment.

Will Carl allow a child to risk his life while he sits on the sidelines and waits for the end?

The balloons that carried Carl and Ellie’s house to the falls are failing. Carl’s only means to save Russell is stuck.

Carl throws all of his possessions from the home to lighten the load. As he flies away to live, to rescue his friends the last image we see of his old life are his and Ellie’s chairs, side by side atop the Falls.

Zach Bowders is a father of 2, husband of 1, marketing analyst for a children’s healthcare nonprofit, and blogger. He lives in Memphis, TN. Read more at talkdaddytome.com