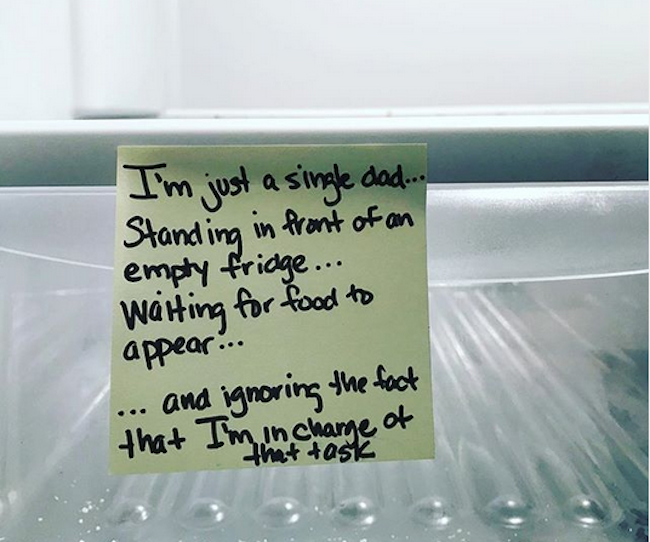 Since moving out of my house, I’ve noticed things about my kids, and myself, that could only be seen from a distance. Here are the most crucial.

In total, I’ve lived alone for two periods in my life. The first time came after the breakup of a five-year-long relationship, before meeting my wife.

I don’t remember much about that period except it was comprised of long weekends of bar-hopping, excursions to strange cities, cleaning up just enough to not scare off women, and writing myself notes to buy toilet paper.

The second time is now, after becoming separated from said wife. Where it ends and where it begins are hard to determine.

The one thing I know for certain is this: Living single is much different this time around.

For one thing, two kids living a couple of miles down the road call me dad.

Those kids crash at the house every other weekend, so I’ve got to keep the place tidy, food shop, buy toilet paper, and use the notes only for their intended purpose.

In this situation, the goodbyes get longer while the hellos are much grander.

I’m not there to kiss them goodnight unless they’re sleeping under my roof.

I’m not the first face they see in the morning.

I don’t hear tiny feet shuffling around on weekends or calls of “dad!” whenever a video game gets too complicated. It’s tough.

But the time apart has also been a teacher and a parenting aid. Since moving out of my house, I’ve noticed things about my kids, and myself — things that could only be seen from a distance.

Here are the most crucial.

1. That the Sibling Bond Is Stronger Than I Realized

I was an only child.

I never minded much, only because I didn’t know what it felt like to have a brother or sister.

It wasn’t until my kids were old enough to play together, protect one another, and form a bond did I understand what I missed by not having a sibling.

Since breaking the news about moving out to the kids, I’ve noticed that the 4-year-old will now wait for cues from the 7-year-old on how to feel and react during most situations.

It’s similar to the way I responded to foul calls when first learning the rules of basketball.

I’d wait for other fans to react before expressing my elation, anger, or disbelief.

My daughter does the same.

They have one another’s backs.

The 7-year-old made the transition to a new place easier by taking it all in stride and making a promise to be kinder to his 4-year-old sister by sharing his toys, playing with her more, and talking to her from the top bunk if she was having trouble falling asleep.

The upheaval strengthened the connection between the pair.

2. How to Appreciate the Little Things

Every parent experiences the “blink and you miss it” when a child surpasses a milestone seemingly overnight.

The small stuff that occurs without much fanfare like growing a little taller or learning to color inside the lines and write the alphabet.

I try to take inventory of the new developments that occur in the time we’re apart.

I’m even starting to miss the activities I once hated like helping with homework or cleaning up piles of toys off the bedroom floor.

It’s hard for a young kid to articulate feelings deeper than the simple “I love you.”

Sometimes it’s actions that show that you not being around as much is having an effect.

Sometimes the kid will come right out and say it in a way that’ll kick the breath from your lungs.

The first words out of the 4-year-old’s mouth after a weekend trip to the mountains without me were “I missed you, daddy.”

“I was worried about you,” was the sentence that followed.

This probably stems from the fact that the ex and I didn’t really go into great detail about why I wasn’t going on the trip or what I’d be doing instead.

I’ve learned to be specific about my whereabouts when I’m absent so the kids know I’m somewhere safe and not that far away.

I felt so silly when I realized my blunder.⁣ ⁣ –⁣ ⁣ #coffee #oops

4. How to Talk With My Kids and Not At Them

They love to hear themselves talk, ask questions, and fill any silence with words, fart noises, airplane sounds, or facts about Ninjago.

I’ve noticed now that the time around me isn’t as long or as frequent, the kids tend to focus on the important stuff.

My son now shares what happened in school and his thoughts on everything from the weather to news covered during current events at school.

My daughter talks about new friends in preschool and asks many more questions about my life.

While we have less time together, the conversations had during those times are better.

5. That Time Apart Is a Good Thing

The origin of the phrase can be traced back to a 16th-century poem.

The author of the poem remains unknown to this day.

Since the writer remains a mystery, I’m going to credit the phrase to my mother, who would repeat it every time a girlfriend went on vacation, moved across the country, or just stopped calling.

As much as being apart from the kids feels awful, it makes the time spent together even more important.

I’ve learned to appreciate the time together, all of it, even the short car rides and quiet dinners in front of the TV.

6. How to Deal with Empty Rooms

My office in the old house was on the same floor as the kid’s rooms.

I’d pass those empty bedrooms countless times a day but they didn’t have much effect on me because I knew the kids would be back eventually.

The kid’s desolate room in my apartment is a daily reminder that they now live somewhere else.

At first, it was hard to stomach so I’d shut the door to keep from looking inside every time I passed.

Now I leave it open as a reminder that they’ll be around soon enough.

7. How to Shake the Feeling of Living a Double Life

For the first few weeks in my new place, a strange feeling overcame me each day.

Here’s the best way to explain the sensation without sounding like a complete lunatic.

I felt like an actor in the story of my life.

My time with the kids, especially in the old house, is when I’m on stage playing the part.

The time spent alone in an apartment is when I’m off stage.

The feeling eventually faded once I made an effort to separate my two existences.

I no longer sit around waiting to play dad. I live my own life when the kids aren’t around.

8. That Adults Can Be Just as Resilient as Kids

Here’s how the conversation unfolds every time I tell anyone that I’m recently separated.

Person: “And how are the kids taking it?”

Resiliency is the ability to withstand or recover quickly from severe conditions.

Every human can recover from painful situations.

Kids are just better at it because they usually have no choice in the matter and they don’t know any better.

Kids can’t fully understand the full scope of the events unfolding around them.

Adults have to withstand the storm or drown.

Nevertheless, they do it with a smile on their faces and act as though nothing is wrong.

Call it resilience, adaptability, or survival. Humans endure an immense amount of heartbreak that makes the moments of pleasure feel even more euphoric, which makes the nights alone less lonely.