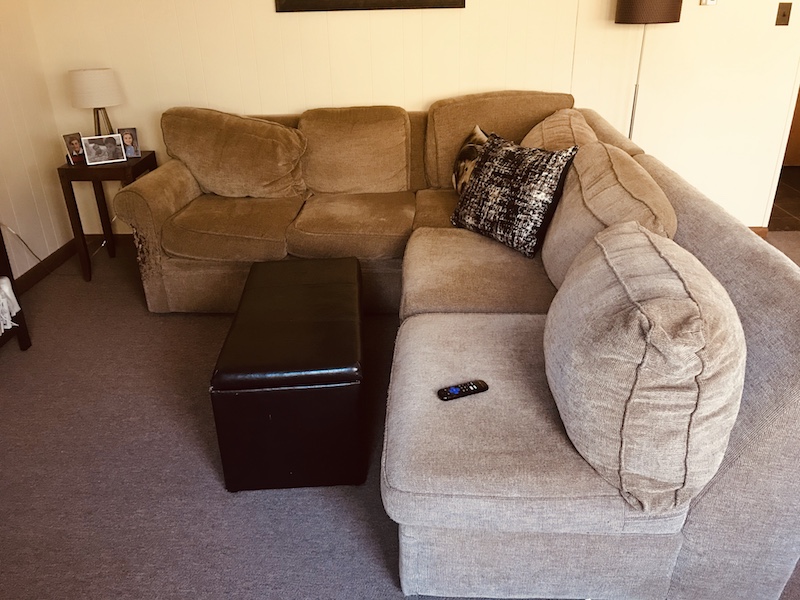 How do you reassemble your life after a separation? Piece by piece.

I hate the couch.

The misshapen back pillows and sunken-in seat cushions are the root cause of my constant shoulder pain.

The cat slashed each corner to resemble the contents of a paper shredder and the pillows must be flipped so that the “not-so-disgusting” sides rest face up.

I’ve daydreamed about the morning I get to toss it, piece by piece, out the front door. I even planned to take a saw to it for fun.

But the couch is coming with me, to its new corner inside my new home, a two-bedroom condo a few miles from the kids and my soon-to-be ex-wife.

You see, my disgust for the couch is equaled only by my children’s love of its tattered corners, buckled padding, and assorted spots and spills.

They find it comforting, which is a good quality to have in a piece of furniture. And I wanted them to be comforted.

We hadn’t told our kids, who are seven and four, of our split yet.

The Suddenly Temporary Roommate — what I’ve taken to calling my former wife — and I debated the best time and way to break the news that dad would have a new residence.

The STR is not legally an ex, but only by words and actions because legalities cost money and spending finances unnecessarily is a primary reason for the temporary absolution of our relationship after nine years, two kids, and one cat.

After months of adult discussion, the situation has become civil.

Our first inclination was to break the news after the holiday so as to not make this the “Christmas that Santa brought a $150 LEGO Safari set but took dad’s desk and chest of drawers.”

The logistics put a kibosh on those plans because the apartment rental started on the first of the month.

Our second was to pick them up from school, show them my new place, as well as a new set of bunk beds and stuffed animals and explain “now daddy has a house and mommy has a house and sometimes you’ll stay at one or the other.”

We decided on that. And I decided to focus on the couch and move on from there.

I figured taking that piece of the old and mixing it in with the semi-new was the wise thing to do for the kids’ sakes.

So, piece-by-unmatching-piece, I began to jigsaw-puzzle a life.

Discounted furniture and a donated microwave made its way from the garage of my former home to my new crash pad.

I nabbed things off Facebook Marketplace and got back furniture from old college friends I hadn’t spoken to in years.

It was a start.

Finally, after a few weeks of preparation, my new place was primed for a reveal.

Before the kids arrived, I stood on the balcony contemplating how all the different ways of telling the children would blow up in our faces. A stretch of road is visible from there.

On it, sits my high school, college alma mater, and the house I thought was my forever home.

The older I get, it seems, the farther down I move on the same road in town.

There’s a lesson in there somewhere, but I’m too young and too exhausted to explore the most profound meaning.

Maybe the answer sits in one of my unmarked boxes.

The kids and STR arrived soon after. In a few short minutes, mom and dad explained to them the new normal that begins after the New Year.

As it so happened, both kids ignored the explanation and focused on that damn couch.

Later, the kids took in the new surroundings and gleefully bounced on their new bunk beds.

The biggest hit of the reveal turned out to be the discovery of empty boxes in my still-barren bedroom.

My kids worked in conjunction to erect a makeshift fort of cardboard in the corner where my desk will eventually reside.

The STR unpacked the kitchen and asked where things should go.

The new cutting board, blocks of kitchen knives, and moonshine glasses slid into new spots.

When it was complete, the STR and I stood in silence and smiled and hugged for the first time in who knows how long.

The tension of telling the kids that dad has a new home suddenly evaporated along with the musk of the old tenant.

The whole ordeal went exceedingly better than we hoped but we both knew there would be so many more hurdles to jump.

At least we didn’t trip at the starting line.

(This article originally appeared on Fatherly)