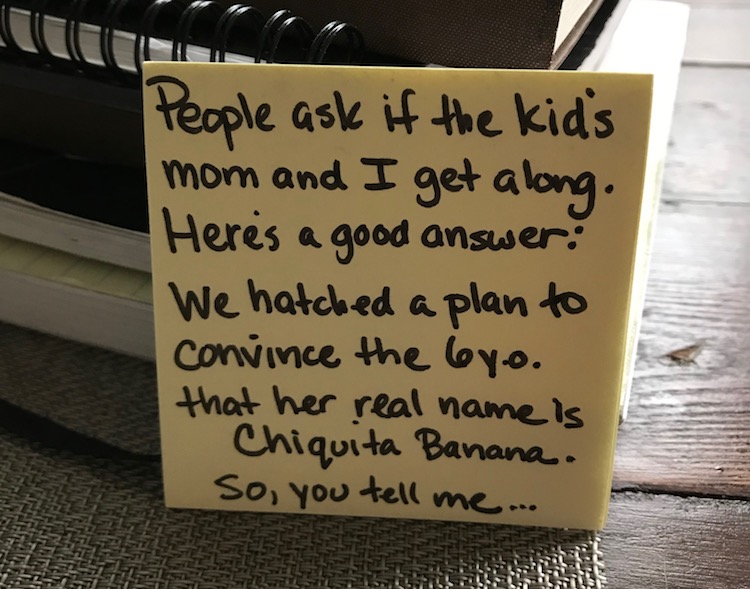 This week in the notes, I cover the endless joy that is homework, taking cash for kids, running out of curse words and trips to the dollar store.

All this homework is payback for never doing my own homework.⁣⁣

Bidding starts at “enough to cover the rent.⁣”⁣⁣

For the first couple of years in my role as a human suddenly in charge of younger humans, I was good at holding in curse words.

I’m not that great anymore.

I blame the kids. They do more things that require cursing.

I’ll give an example. Yesterday, running late for school, we’re hurrying to the car, and the 9-year-old just stops and stares into the distance.

Do you know the joke about ADHD people where they’re saying something important and then cut themselves off and yell “SQUIRREL!” and get distracted?

I honestly believe he was staring at a squirrel because there was NOTHING else around.

I know the F-word fits better in that statement, but I save that curse for special occasions.

The kid snaps out of the gaze and hustles to the car.

The 6 y.o. is in the backseat already, but not buckled in, she’s on the floor suddenly fascinated by the markers that have been rolling around under her feet for months.

The kids both laugh at the question.

They laugh when I curse. Probably because it doesn’t happen too often.

Only during random marker inspections and impromptu squirrel watching.

Except it’s not always a squirrel or markers. It’s whenever they’re not doing what I need them to be doing.

Which, now that I think about it, is all the fucking time.

I love being dollar store rich. ⁣
⁣
We’re in the toy aisle, and I’m telling the kids, “you can pick three things,” and their eyeballs shoot out of the sockets because that’s three news toys, but I know that’s six more pieces of crap that they’ll forget about in an hour. ⁣
⁣
The 6-year-old gets two items and slime every time. If my daughter didn’t choose slime, I’d be worried about her mental condition. I let her buy slime because it’s better than making slime because making slime is the fucking worst. ⁣
⁣
Being asked to make slime is a capital punishment for adults. ⁣
⁣
Parent 1: “Tough day ahead. I have to take the kids to the doctor to get four shots each, we have to bury the family dog and then get the car serviced at a dealership with no WiFi in the waiting room.”⁣
⁣
Parent 2: “That sucks. I promised my daughter I’d make slime.”⁣
⁣
Parent 1: “Oh, god! You poor bastard.” ⁣
⁣
The 9-year-old leaves the dollar store with ninja/soldier/secret agent gear every time. Last time he chose “numb chucks” and a pair of sai – Raphael’s swords from the Ninja Turtles – that seem just pointy enough to send someone to urgent care. ⁣
⁣
“Don’t poke your sister with those.”⁣
“I won’t.” ⁣
“I know you won’t intentionally poke her, but I’m telling you not to pretend to poke her, accidentally bump into her, and gouge her eye out.” ⁣
“What does gouge mean?”⁣
“Poke.” ⁣
“I won’t.”⁣
“Your sister needs her eyes.”⁣
“I won’t!” ⁣
⁣
Three packages of fake weapons.⁣
One container of slime.⁣
Two Trolls blind bags.⁣
One box of band-aids for after the unintentional eye-gouging. ⁣
One bottle of cleaner that removes slime from a couch. ⁣
⁣
One quiet weekend afternoon until someone gets poked. ⁣

And I follow-up with the question, “did you hear what I said?” and once, JUST ONCE, I’d love for either kid to respond, “no, I wasn’t listening AT ALL.”

I wouldn’t be mad.

I’d probably respond, “THANK YOU!” and the kid will assume I’m thanking them for not listening when really, I’m commending the honesty.