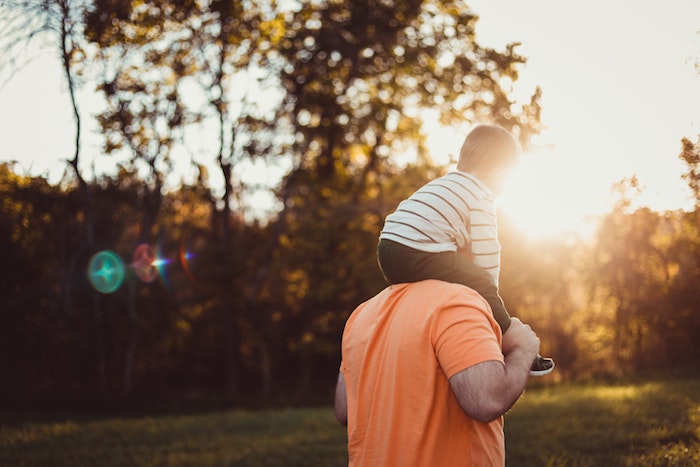 For the second time in four years, my full-time job is a stay-at-home dad. In both instances, circumstance landed me in an unpaid position.

“Circumstance” is a nicer way of saying “laid off.”

It’s a surprisingly plum gig: I’m fortunate enough to spend all day with my two children—ages 3 and 7 months—while still being able to retreat to the basement at night to write part-time.

Sure, I could do without the 5 a.m. feedings, library sing-a-longs, and the diaper bag that lives on my shoulder, but I get a front-row seat to my kids growing up—and that makes me a lucky man.

I’d be lying if I said I was even remotely prepared for my occupation, though.

The second time around has its struggles, but I’ve mastered many problems that threw me for a loop as a newbie.

If you’ve just been handed a ticket to the same seat I’m in, consider this your program.

Here are seven things nobody tells you becoming a stay-at-home dad—until now.

1. You’ll have more than a few meltdowns.

You know that moment of panic you get when you start a new job?

It usually occurs after all the initial excitement has worn off and the grim reality of your new responsibilities has kicked in.

Well, during your first week at home, that feeling will take over your flesh and bones at least 100 times.

It’s usually in situations that seem the direst, like when one kid is freaking out because you only put peanut butter on half of the sandwich and the other is crying because she hasn’t dropped a load in two days.

But understand it’s a normal part of your schedule—and it gets easier over time.

2. You’re going to miss your cubicle.

Every day I worked in an office, I wished to be anywhere but at my desk, staring at my screen, and doing the work I was being paid to do.

But now I think about how much I’d kill for a long stretch of silence in a private cubicle.

There will be parts of work you’ll miss—the camaraderie with adults your age, the steady income—and those feelings never quite fade.

But then you’ll think about all the stuff you don’t have to do anymore—expense reports, HR seminars—and realize watching Power Rangers with your son is a much more rewarding use of your time.

3. Until you establish a routine, things will be tricky.

The regimen you had at your 9-to-5 was comforting.

It requires some work to replicate it at home. In my first go-around, each day was left up to chance.

“Maybe we’ll go to the park,” I thought, “and then we can figure out what we’ll do for lunch.

Or we can just lie around in our pajamas all day.”

It took a couple of months to realize the flaw in my plan: First off, kids need routine.

Let a tyke spend 24 hours in his Spider-Man footie PJs and he’ll want that option every single day. Developing a schedule and sticking to it is much easier than living off the cuff.

You don’t have to arrange the same activities day in and day out, but set times for each one so the kids know the next step in dad’s daily plan.

4. You’re going to look like hell most of the time.

An enormous chunk of your day involves preparing your children for theirs. Just dressing them takes an absurd amount of time—sometimes hours—and everything depends on their mood.

Your rule of thumb: The better-dressed the kid, the worse the parent looks.

This is also why families are late to everything.

When you spend half your morning picking out an acceptable outfit for your highly critical 3-year-old, you don’t give much thought to your own wardrobe. Kind-of-clean jeans?

Plan your outfit at night, and hope there’s enough time to put it on the next day. Also: Showers occur only on the weekends.

It used to be hard to meet women, but then I got married and had kids.

Now that I hang out in public places during the day, I encounter tons of ladies—who just happen to come with adorable children.

I’m an expert at talking to women now, simply because there isn’t much else to do but chat with fellow parents while your kids are dancing around a library community room.

The adult conversations will keep you sane, and most of the moms have a wealth of knowledge when it comes to keeping kids busy.

Make them your most trusted allies.

6. Your kids will probably hate you.

Last week while we were out shopping, my son announced that he hated me and only loved his mom—loud enough for everyone in Sears to hear.

What did I do to earn his vitriol? Tell him it was time to go home after only an hour at the indoor playground. Only an hour, because I’m obviously a monster.

Being the only parent around means being the only person in charge and the only one—besides mall cops on Segways—to stop kids from having fun.

So your child will probably tell you he hates you way more than he says he loves you—which is fine, because it means you’re doing a good job.

7. This is the best time of your life — and theirs.

Both of my folks worked when I was growing up, which meant I got a car as soon as I received my license, and other kids didn’t.

But there was a downside to having employed parents: I don’t really remember much about our time as a family. Sure, I recall the vacations and birthdays—the milestone events—but only because we relive them through rehashed stories at holiday parties and old photo albums.

My son goes to daycare half the week, and the baby is with me every day.

The kid looks forward to our time together, and I hope my daughter will, too.

As hard as this job gets sometimes, I wouldn’t trade these days for any office promotion or bonus.

One day your kids will think back to this time and miss it just as much.