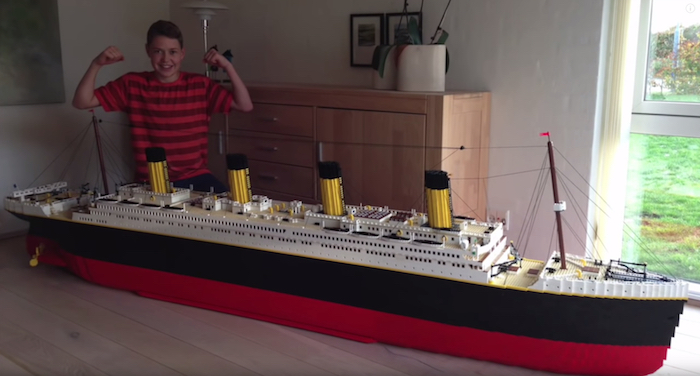 This time-lapse video of a kid recreating the Titanic using LEGO is pretty amazing.

Then you stop to think about how much it probably costs for this kit or to collect all of the bricks necessary to build the world’s most unsinkable ship.

According to the official LEGO website, this monster would run about $300 but there is a smaller version for around $100.

It’s easy to see why. LEGO fans are nuts!!

Here’s another timelapse video of a smaller Titanic LEGO with some peaceful music that will lull you into thinking this build would be fun and relaxing.

How much for LEGO mini-figs of Jack and Rose to put onboard Titanic Lego?

I’d leave them floating around the side of the Titanic with Jack constantly screaming ROSE MOVE OVER! THERE’S ENOUGH ROOM ON THAT PIECE OF WOOD FOR BOTH OF US! THIS WATER IS FREEZING!!!

Even though LEGO doesn’t make an official Titanic building set, sets are available from other manufacturers.

Micro blocks are considered a superior building experience with greater challenge, sophistication, and detail than any other construction set.

Dovob believes “the smaller the brick the better the build.”

On the underside of the model, there are miniature wheels that allow it to ride it on the floor or carpet. It has movable propellers.

It also includes a plate with a ship’s name and a miniature iceberg.

This unique model from COBI is more than just a toy!

Young or old you will enjoy the time spent assembling this incredible model.

Once completed, this set makes for a very nice display piece for the mantel or a shelf on your child’s bedroom wall.

Experience the wonder and magic of the Titanic with this building brick set!

The ship of dreams can be at your fingertips. This replica is hyper-realistic and suitable for ages 8 and up. The tight fit bricks are compatible with all major brands and will work with your children’s existing collection.

This high-quality model is made from ABS plastic is safe, durable and made for long term use. The set includes 907 pieces and a detailed, color instruction manual.

For less expensive but still awesome LEGO stuff that isn’t connected to major tragedy in our country’s history, go here.

1 comment on “Titanic Lego Set Recreation Is Amazing Until You Find Out The Time, Money Involved”