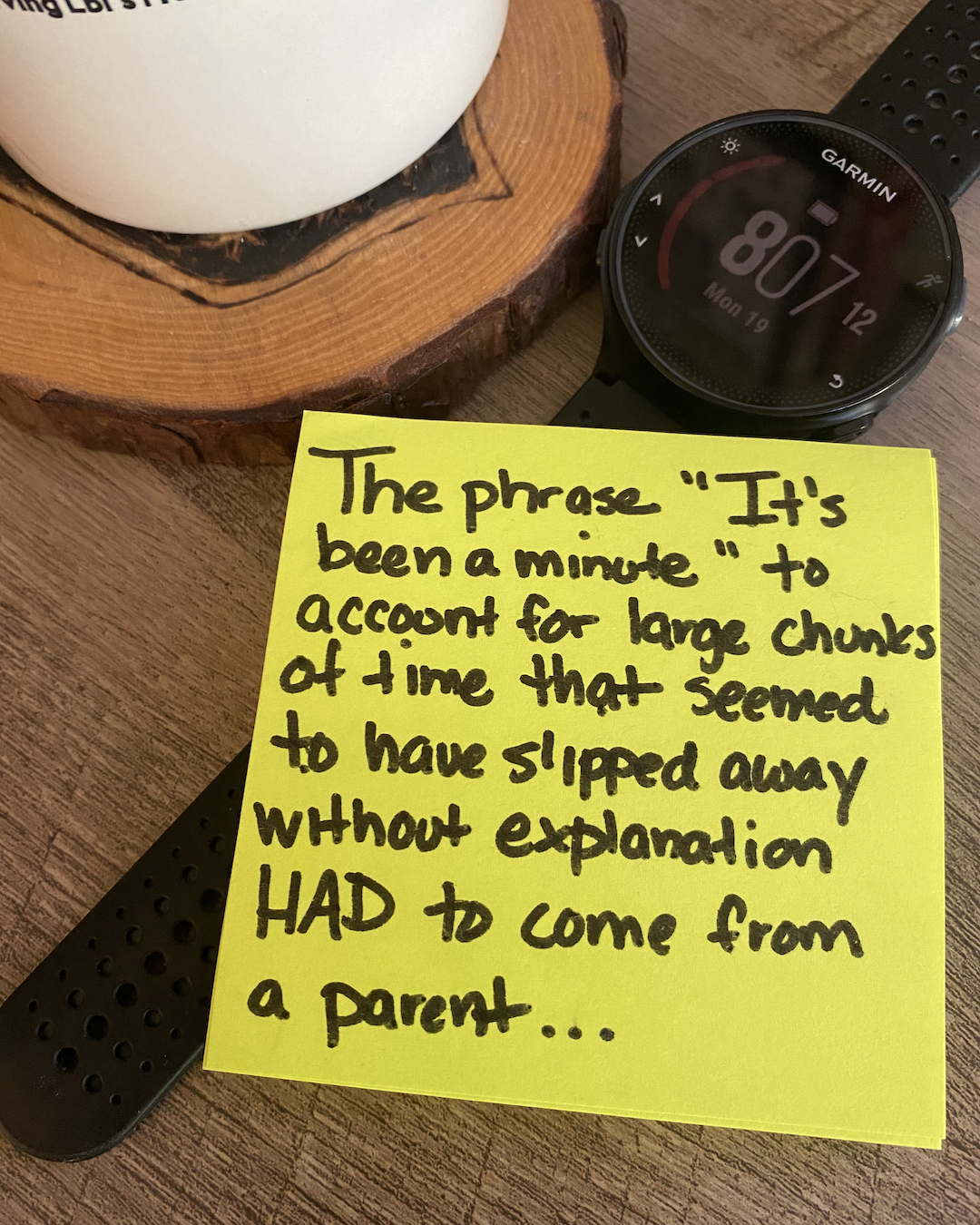 While talking to a friend of mine, Madeline, who runs a successful company selling Vegan self-tanning products, she used an expression I’d never given much thought to.

I told her I hadn’t done this specific thing in quite some time and her response was “oh, so it’s been a minute.”

I’d heard the expression before, but for some reason – this time – “it’s been a minute” stuck in my head for days after the talk.

‘It’s Been A Minute’

If you’re unfamiliar with the expression, “it’s been a minute” is another way of saying “it’s been a long time since I’ve done a particular thing,” but it doesn’t really feel that long.

The expression is something you might say to a friend you haven’t seen in a long time that you happen to run into at the grocery store.

“I feel like I haven’t seen you in years.”

You get the idea.

I thought about this expression for days and concluded that there’s no better explanation of life as a parent than “it’s been a minute.”

When was the last time you did something for yourself? It’s been a minute

When was the last time you went out without the kids? It’s been a minute.

When was the last time you went through a day only wiping your own ass and no one else’s? It’s been a minute.

This week, think about something you once enjoyed doing that you haven’t done in quite some time and do it.

It doesn’t matter how big or small—just something you haven’t done in some time.

Let’s all make an effort to get back some minutes.

I now have merch. You should check it out.

The “Ultramarathon Man,” Dean Karnazes, joined the show to talk about his new book – A Runner’s High: My Life in Motion – and discuss his life and career. Dean is a gifted writer, and his new book is as much about family dynamics as running.

Once named by TIME magazine as one of the “100 Most Influential People in the World,” Dean Karnazes has pushed his body – and mind – to inconceivable limits.

LISTEN TO THE ENTIRE EPISODE HERE or watch a part of the show on this YouTube clip below.

I spoke to “The Draw,” Sami Callihan, of IMPACT Wrestling before his big match against Kenny Omega at Slammiversary 2021.

In this interview, Callihan discusses the inspirations behind his many different looks over the years, other wrestlers “borrowing” his moves, and the one place he’s recognized the most frequently.

LISTEN TO THE ENTIRE EPISODE HERE

STUFF I DID THAT DOESN’T INVOLVE STICKY NOTES

HERE’S WHAT I’M READING: Write or Wrong: A Writer’s Guide to Creating Comics

I had the pleasure of interview comic book creator Dirk Manning on a recent episode of “Not About Wrestling.”

I’ve always wanted to write a comic book and this collection of advice from Dirk’s “Write or Wrong” column at Newsarama is my jumping-off point.

HERE’S WHAT I’M PLAYING WITH THE KIDS: All Of Us

This game is great to play with kids and older adults. Who doesn’t love a good trivia question?!?

HERE’S WHAT I’M LISTENING TO: Getting Chores Done playlist on Spotify

I don’t listen to it while doing chores – at least I haven’t yet – but it’s a great playlist for running.

Finally, one more reminder to send in your questions for “Ask Chris Anything.”

If you have a question – any question – shoot it over to messagewithabottle@gmail.com.

Have a great week, and be kind to one another.