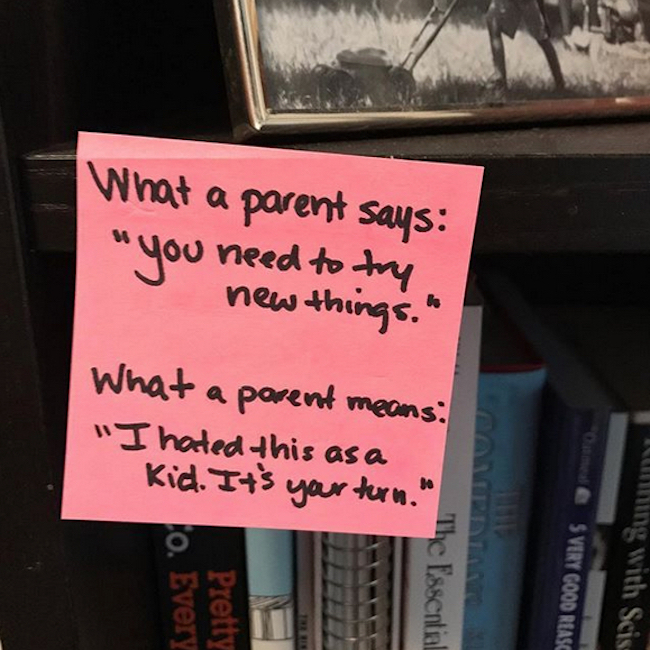 I sign up my son for activities, and he goes whether he wants to or not.

We have one rule – finish it out. If you hate it, you don’t have to do it again. Usually, he ends up loving it or liking it enough that he doesn’t want to quit.

He’s in his third-year of soccer, going back for music lessons in the Fall, agreed to lacrosse next Spring, now looks forward to swimming lessons and can’t wait for farm camp next year.

“Wait, do I get to touch the animals?”

The first day at a new camp is usually stressful. He’s seven years old, and I’m dropping him off at a place he’s never been and handing him over to complete strangers.

During drop off on his first day of farm camp, his shoulders slouched and he was hiding behind me during sign-in.

I could see a bit of apprehension on his face. I wished him luck and headed towards the car, and thoughts of my first days of anything new immediately popped into my head.

I never wanted to go to a summer camp or play a sport because of attachment issues and an irrational fear of being forgotten.

My parents never forced me to do anything. They’d suggest a sport or activity, I’d rattle off four lies about why I didn’t want to do it, and they dropped the subject. Most kids are scared of monsters.

My biggest fear was being left behind forever.

At pick up time in preschool, I’d hang around the entrance so my mom would find me the minute she walked through the door.

These images would pop into my head of her walking into the crowded playroom, be unable to spot me, and just give up and leave.

As an adult, and now a parent, I realize these thoughts were irrational, and I was being stupid.

I’m afraid he’ll feel the same sense of panic as friends get picked yet I’m still nowhere in sight.

I’m fearful that he’ll be too anxious to move away from the door and miss out on playing with friends.

So I’m one of the first parents at pick-up every single time.

He’s much stronger than I was at his age.

He’s also friends with a ton of goats now.

Why are we such jerks? ## NEW BLOG POST – clink the link in my bio. #parenting #parenthood #kids #dadlife #stayathomedad #notes