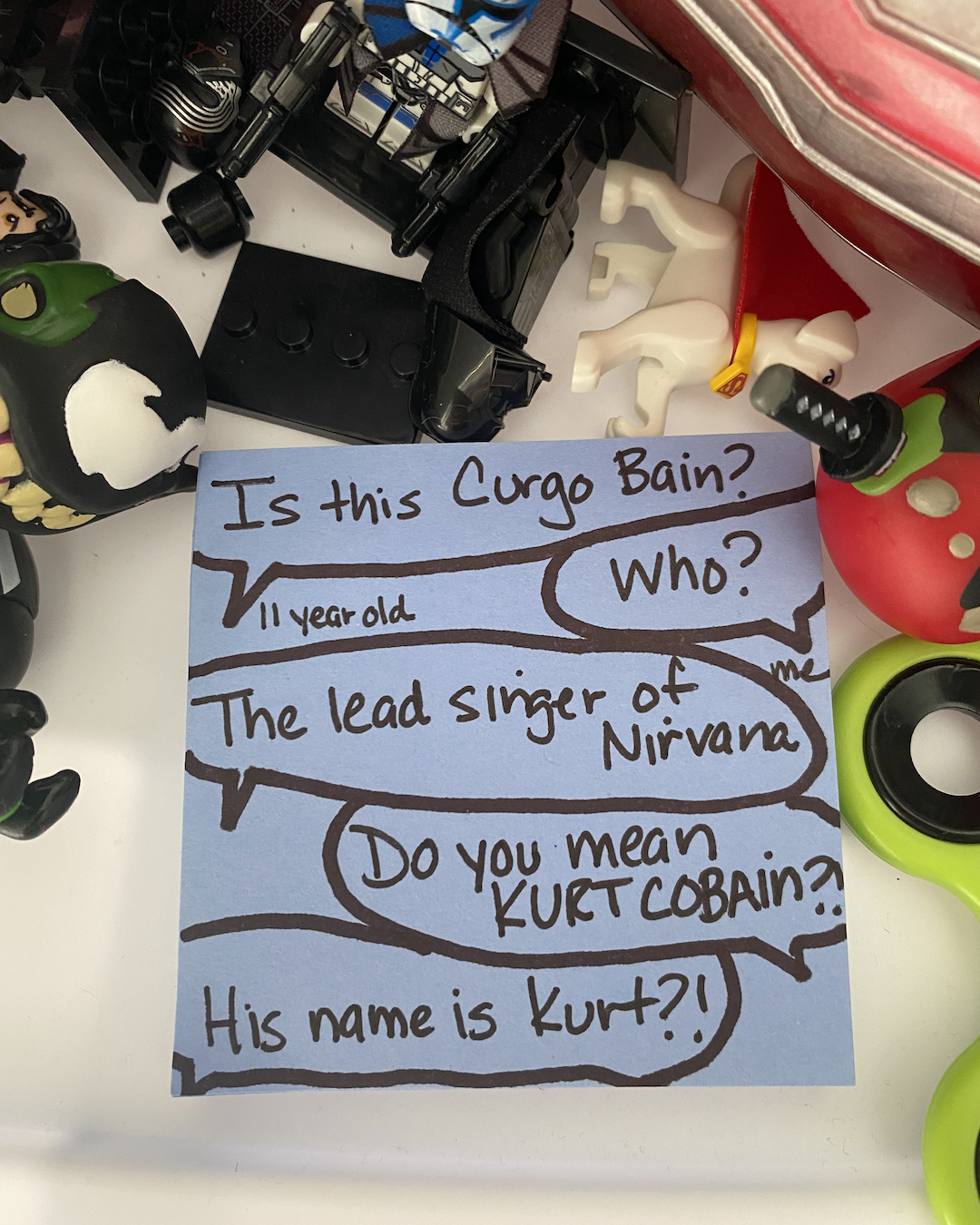 “Can we listen to Nirvana?”

The 11-year-old asks every car ride. He’s playing drums in a “Rock and Grohl” show at the end of the month, ingesting nothing but the most influential band of my generation, Nirvana, and Dave Grohl’s next project, Foo Fighters, a band who might have eclipsed the original trio in popularity and significance. (That’s a debate I’ll leave up to musical minds more significant than mine.)

I’ll occasionally oblige because I’ve grown to fall back in love with and understand Nirvana over the years but try to steer the music towards Foo Fighters because that band means a little more to me. For Christmas, the kids gifted me with Dave’s autobiography, Storyteller. The book is a fantastic read, and I’m somehow a bigger fan of his work and legacy but secretly hate the mother fucker for being such a talented scribe.

Every member of Gen X remembers the day Cobain died.

I’m lying on the couch in my parent’s house, and Kurt Loder breaks into MTV programming to tell a generation of kids that the voice of our generation put a shotgun to his head and ended his life. Being a junior in high school, I didn’t understand death, not the way a person grows to understand the passing of another human.

I remember hearing “Smells Like Teen Spirit” for the first time on the radio and thinking, “what the fuck was that, and where can I find more?” I digested the entire Nevermind album while driving laps around a mall parking with two friends because it was the 90s, and that’s just the shit you did to pass the time. I was a Nirvana fan but not as passionate a devotee as some of my friends.

Cobain was 27, which sounded old and an entire decade my senior. Not only was death a foreign concept, but I didn’t understand mental health issues, depression, heroin addiction, or the pressure of fame. All I remember thinking was that killing yourself at the height of fame with millions of fans sounded like a pretty dumb idea.

Cobain’s death was one of the first tragedies in my lifetime that played on an almost continuous loop, or so it seems, on one of the few cable stations I watched regularly. I checked in on Cobain coverage sporadically but purposely avoided all of the footage shot at makeshift memorials and outside his home. I didn’t believe that 24-hour coverage of death and suicide was good for a person’s mental health, and I still don’t today.

Reading Dave’s book and Nirvana being the soundtrack to most car rides for the last few months slowly forced all the memories from that time to come trickling back into my brain. In the chapter discussing Kurt’s death, Dave talks about losing his friend in 1994 and then losing his best friend before the age of 40. Dave talks about the impact of both and what losing a friend does to a person’s heart and soul.

For the first time in longer than I care to admit, I thought about the first close friend I ever lost. His name was Tommy. We met the first day of freshmen year during algebra class. In the middle of the teacher’s first lesson, Tommy turned and whispered to me, “well, this is going to suck. What’s up? I’m Tommy.”

We bonded over Denis Leary and the Jerky Boys. We saw George Carlin live together. In the middle of the show, he leaned over to hit me because we were both laughing so hard, and the chair’s armrest broke right off. The theater was built in the 1930s, and the chairs were original. We both looked at each other as Tommy held the piece of furniture in his hand.

“What are you going to do with that?”

Tommy was funny, outgoing, and fearless about putting himself in front of people.

We were both 16 when he died in a car accident on his way to work.

I remember getting the phone call. I remember the difficulty of getting through the next day of school. I can visualize every moment of the viewing, church service, and burial. I remember the memorial service held at school, being asked to do a reading, and sitting numbly on stage and wanting it all to be over. I can still recall every moment of that week in my head. The only fact I couldn’t remember was the date he died.

Thankfully, the internet is the keeper of all information, and I was able to find his obituary almost thirty years later.

I didn’t understand death when the lead singer of a rock band died, but I sure as hell understood the finality of life now.

I’ll never know the full impact Tommy’s death had on me. I don’t know if it’s better or worse to experience tragedy at such a young age. I didn’t talk to any professionals about his passing in 1994 and never brought it up in the years since. One day I’ll have to unpack it all. The passing of time is sure to play tricks on the memory and all the possible emotions that passed through my adolescent brain.

The note above is genuine. For the first few weeks practicing the show, my son thought the lead singer of Nirvana was Curgo Bain. I can understand how he heard what he thought he heard. He wants to read Dave Grohl’s book and now understands the legacy of Kurt Cobain and Nirvana’s influence on music in just a short period of time.

One day, I’m going to tell him about Tommy. My son needs to learn his name too.

I seem to have hit on something here – kids are secretly cross-eyed.

I love the cat, but he’s a pain in my balls.

This video made friends legit mad at me for a minute because they thought I had a girlfriend and didn’t tell them.

That’s going to wrap up this week. Please do me a favor and subscribe to my website to never miss an update. And if you haven’t checked out my line of customized Post-It Notes with 3M, you should do so immediately!