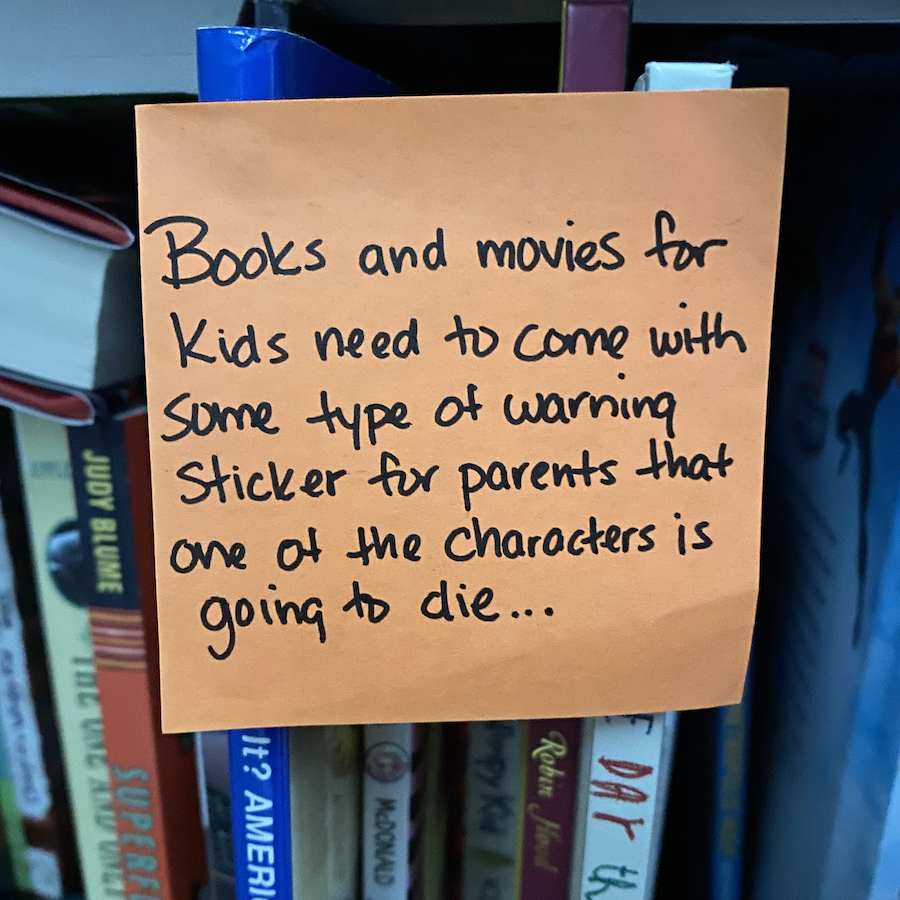 The kids’ new favorite game to play during movies is “which person dies” because it happens in virtually every kid’s movie.

In fact, death happens so frequently in films that my kids have even mastered the way each movie will handle the character’s demise.

This weekend, while watching a new release I won’t mention because I don’t want to spoil the film, my daughter turned to me and said “oh yeah, that guy won’t be in the entire movie.

They’re going to jump to like 20 years later, she’ll be standing in front of his grave, saying something about how she should have listened when he was alive.”

Well, she didn’t get entire the scene correct, but she was pretty damn close.

The last book I read to the kids involved a featured character dying and his death was completely unexpected. His eradication left one of the main characters of the story – a 10-year-old girl – an orphan. The character’s age equaled my son’s age at the time. I had a blast discussing death with the kids right before turning out the lights.

I know death is a part of life but I’m not sure a character meeting their final demise needs to be the rising action or climax of every kid’s tale.

Most films and books kill off a character or two while more than a few films kill off way too many people. Look how many characters Pixar has killed off.

If there’s going to be a death – and parents have to do some explaining – at least give us a heads up. Rate the movie PGPD for Parental Guidance Parent Dies or slap a sticker on a book that warns “remember Bambi? Yeah, get ready.”

Life isn’t all sunshine and rainbows but we’re all not crushed to death on a Tuesday like Wall-E.

I hit 50K followers on Instagram and celebrated the only way I know how.

I got this really nice DM from a guy about my book – “The New Dad Dictionary” – and it made my weekend.

We talked to Brendan Carpenter about shedding 160 pounds by running and going viral for farting. Yes, farting.

We’ve been doing recaps of the Vice show “Dark Side of Wrestling” by highlighting some of the not-so-dark moments of each episode.