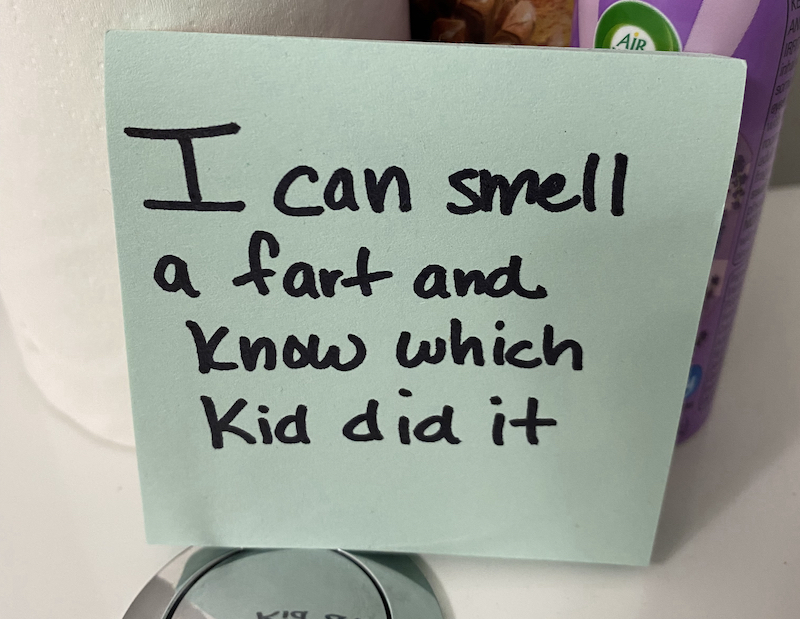 I’m not proud of this odd ability. It’s just one of the weird superpowers that parents develop over time.

What’s your weird parenting superpower? Tell me in the comments.

Yesterday, I had the pleasure of recording an upcoming episode of The Danny Miranda podcast. Danny is a fascinating guy. He seems to have his life figured out, for the most part, or at least he’s on the path to figuring out how to pursue his passion.

During the interview, Danny and I talked about taking compliments and the ability to just say “thank you” when someone does or says something nice.

The discussion started with the question, “what’s the kindest thing anyone has ever done for you?” It was such a tough answer to come up with on the spot. I chose the most recent example that came to mind. It wasn’t the kindest gesture ever, but it was incredibly sweet and heartfelt.

As always, hours later, I thought of a good response. It’s a story I’ve never shared publicly until now.

My marriage was imploding at the time. We decided it was best to part ways and file for a separation. We agreed separation was the best course of action the day before leaving for a family vacation to Disney World. That’s right, the ex and I decided to end the marriage and still spend a week together at the “happiest place on Earth.”

We faked contentment as the best we could, but even the strongest of couples will fight on vacation with two exhausted children on sensor overload, but instead of disagreeing on the order in which to ride the rides and which overpriced restaurant to dine at next, the ex and I quarreled over how to tell the kids, who was at fault, and which furniture will go with me. If you’ve been following this blog long enough, you know who got the piece of shit couch.

We never fought in front of the kids. We argued under our breath or in bed after the kids passed out and shot each other angry looks in-between smiling family photos with the characters. After one photograph, Pluto took a long look at my face and probably could tell something was wrong and shot me a quick fist bump.

The day before flying home, at the hotel pool, the conversation got hotter than the Florida temps. There were hundreds of emotions going through my body, and most involved heartbreak and rage. My daughter, just four years old at the time, was begging to play ping pong. The paddles were on the table, but the ping pong balls were in a gumball machine and cost $.25 because this is Disney and taking out a second mortgage to visit the park isn’t a high enough price. The company needs our pocket change too.

My daughter is begging me to play. The ex and I are fighting, and the people around our chairs can hear since everyone is squeezed into the pool area with little room to spare. It’s evident to everyone around us – but not the kids – that she and I wanted to be as far away from each other as possible.

My daughter is tantruming because I’m not finding a quarter fast enough to play ping pong. The ex doesn’t have a quarter. I don’t have a fucking quarter. No one has a quarter because who carries change to a goddamn pool. It’s easily one of the worst moments of my life. I’m standing there frozen (no pun intended) and had no idea what to do next.

I feel a tap on my shoulder. I turn around and come face-to-face with another man. I didn’t know him, but I recognized him because he’d been sitting close enough all afternoon, probably taking a ton of friendly fire.

He lifts up his hand. He’s holding a quarter.

“Here, buddy,” he says, “it seems like you could use this more than me right about now.”

I want to cry. I want to hug the guy. I settle on looking him in the eye and saying, “thank you.”

I don’t remember one single physical attribute about the guy. I couldn’t tell you what he looked like, if he was clean-shaven or had a beard or in shape or had a dad bod, wore a hat, or had an accent. If I had to, I couldn’t give one defining characteristic to a sketch artist to recreate the man’s likeness.

I only know one thing about him – at least for that moment, he was the kindest person on Earth.

OTHER STUFF I DID ON INSTAGRAM (WHEN IT WAS WORKING)

If anyone wants to be a guest on the show, let me know.

STUFF I DID THAT HAS NOTHING TO DO WITH PARENTING

On We Run This, I spoke to ultrarunner and father Trevor Fuchs about losing and finding himself in running, being a dad, all his old worthless baseball cards, and his love of cooking and baking.

STUFF I WROTE THAT HAS NOTHING TO DO WITH PARENTING

It’s always interesting when I get two assignments from different publications on the same topic.

Over on The Manual, I wrote a piece about tips for taking kids hiking for the first time.

On the Interesting Things, I wrote about the best hiking shoes for kids.

And now, for stuff entirely unrelated to camping, I wrote about how to hold a second job without burning out and money mistakes we Gen Xers wish we didn’t make when we were young.

That’s all I’ve got for this week. This was an emotional post to write, and I hope you took something from it.

Have a great week, and be kind to people you know and especially to strangers.